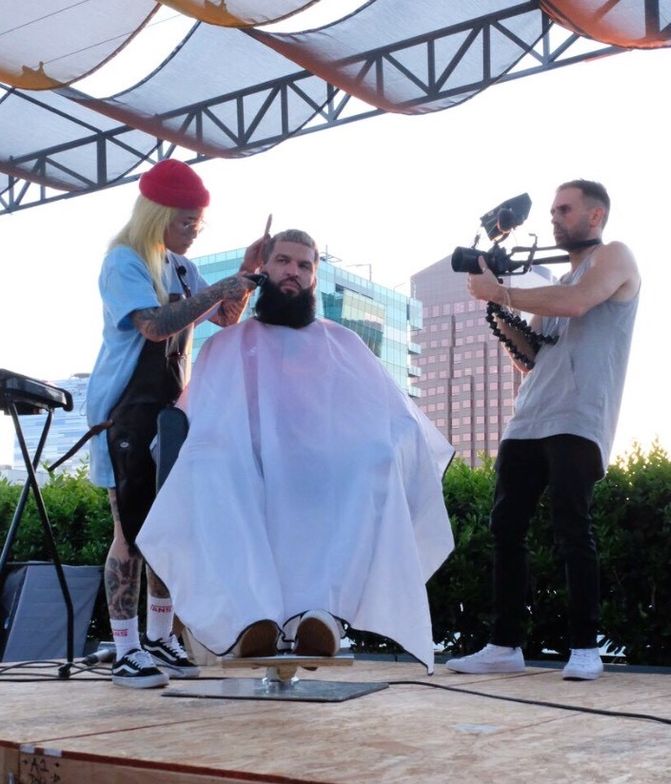 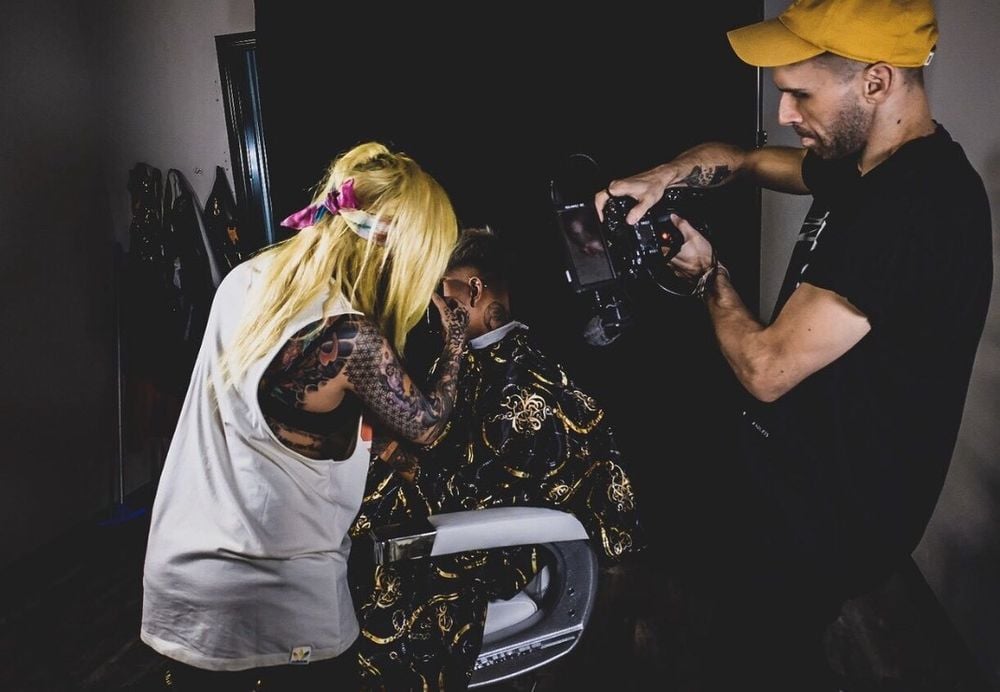 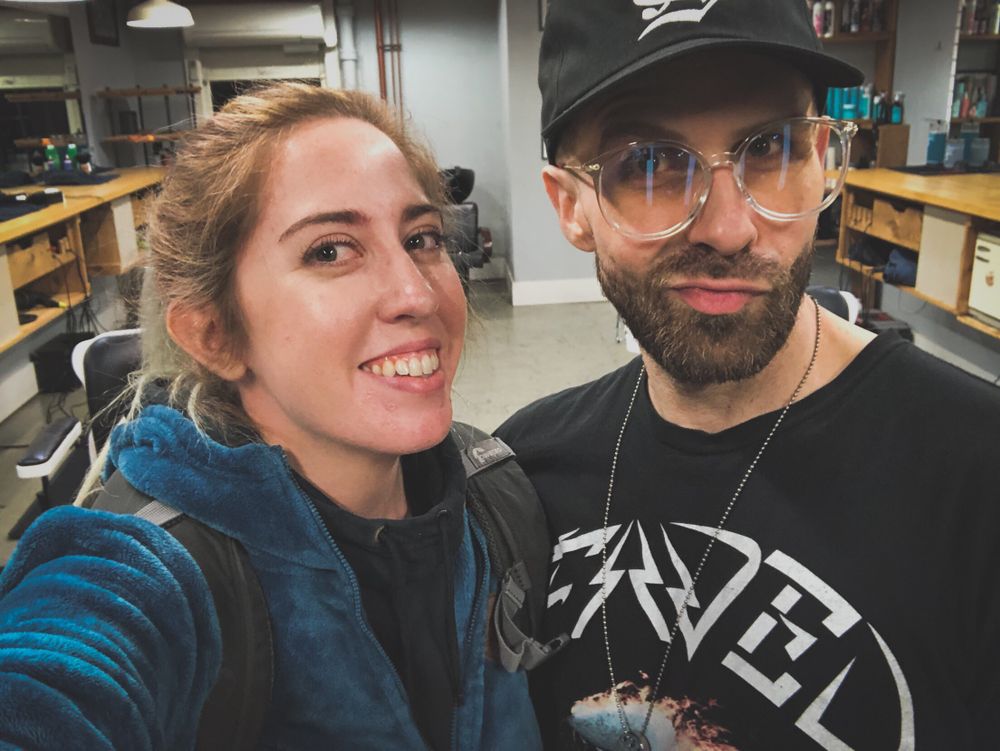 Alyssa Lynn Von or Lady Von Barber (@ladyvonbarber) captured the American Crew U.S. All-Star Challenge in 2015, an annual styling and photographic competition. Her most recent venture is promoting the work of other barbers and men’s groomers by taking tours of barbershops, interviewing barbers and hair artists, and sharing a behind-the-scenes look at their work and their lives. Here is her interview with Ryan Chisesi @ryanchisesi, a licensed stylist who is also an accomplished musician and filmmaker.

"I had the privilege of sitting down with Ryan Chisesi, a rising star in the hair industry," says Alyssa Lynn "Lady Von Barber" Von. "Ryan does hair but he also films some of the top hair artist and top music artists.  Here is the story about how he had the courage to pick up the camera and started filming creatively."

Lady Von Barber: What school did you go to?

RC: Paul Mitchell, 10 years ago, and graduated with a degree in cosmetology.

LVB: How was school for you?

RC: I learned a lot in school. Paul Mitchell had amazing education classes on shear and cutting work. They gave me a solid foundation so I was able to leave feeling confident with knowing how to cut hair. The only downfall was leaving school not knowing about barbering; it wasn't being taught there 10 years ago.

LVB: So you feel education is important?

RC: Oh, yeah! One of the top things in life!

LVB: Do you think that educators in hair school need to step up to the plate or do schools need to fix the education?

RC: Besides technical learning, we need to focus more on how to help people know how to communicate as human beings, and how to be relatable. How to really check for understanding and how to take care of someone's needs, and how to address them, not only in hair school but in college and work places so people have the knowledge technically and socially.

I knew I wanted to be an awesome hair stylist going into hair school but I had a hard time letting go of my ego because I thought I had it already made. Letting that ego go is best so that you are open to learn.

LVB: Did you have any hobbies besides hair that you loved?

RC: I have been playing music since I was 16 years old. I was in a metal band called Mortified Mortician, you can find our music on Spotify, and I played bass, guitar, and wrote the songs for our band. Mortified Mortician went on tour so I stopped doing hair for a year so that I could tour internationally with the band.

LVB: By being in a band do you think it help your success in the hair industry?

RC: Yes! It helps you to be able to do anything, because I can sleep anywhere, I can go anywhere, and I'm just not scared.

LVB: What got you into the hair industry?

RC: I have always been into hair. My hair dresser was teaching at Paul Mitchell School and I asked him what it was like, doing hair. He told me I will just show you. He had me show up to be a hair model for a skills class one day at the school and after he was done teaching the class he showed me around. After that I knew I loved hair. I was literally enrolled at Paul Mitchell within two weeks.

I was also going to college at the time to major in counseling, and as a hairstylist/barber it’s very true you are a counselor to your clients. It just made sense to me to go to school to pursue hair. Also, l I felt like there was this freedom of dressing up like a rock star as a hairstylist. You don't have to conform into a one way look which I really love.

LVB: How do you feel about Instagram/Social Media?

RC: It is a platform to put your voice out there but you can’t please everyone. If you focus on what others think, it’s going to be very hard to move up. You have to know yourself and not be scared of putting yourself out there. Once I got over being scared of what others think and just when I said, “Screw it, I’m me and I’m going to be me” it all started happening for me.

LVB: Who is your influencer in the hair industry?

RC: Sofie @staylgold31 who is a leading star on Instagram with 300k followers. She is based out in LA and is sponsored by Babyliss. She also has won in 2018 Best Female Barber, BCNYC and 2017 Barber of the Year, AIA.

LVB:How did you get into filming?

RC:  I had been doing hair for 9 years and at one point I did it all – hair shows to hair extensions, working at a few different salons/barber shops—but I was not happy. In December 2014, I met Mikey while working at a barbershop and when Mikey and his wife Kendelle opened Brick and Mortar in Portland, I went with them. At the same time, I started to do fitness and bodybuilding as well while barbering at Brick and Mortar. In 2017, I blew out my right shoulder but as a 1099 worker without health benefits, I worked through the pain until I couldn’t and opted for surgery.

While recovering, I worked four days a week (Mikey was super chill and understanding) but I wasn’t recovering and my doctors said I needed to quit my job—which I wasn’t willing to do.

My friend and I were making a YouTube Channel to keep me occupied with everything going on (my aunt was also dying from cancer) so I poured what money I had left into buying my first Sony 8600 camera. It showed me something I could do without my arm hurting me. It also showed me that I was going to start changing my mindset and not be scared of what others think. I got rid of people I was following on Instagram who didn’t motivate me or had no use for me to watch them. I had been following Sofie @staygold31 for awhile at that point and really liked her feed. One night I was watching TV and came across Sofie’s post about how she had no time for filming and editing her work and that she needed help.  I took action and wrote to her. She looked at my stuff and after a few weeks of back and forth she sent me some film she had worked on with the Bloody Butcher.

She wanted to see if she could trust me with her work, so I edited her work and was super afraid to send it to --there was that fear all over again--but soon got a reply saying it was super dope. Sofie loved it and I’ve now been able to film with top brands like Schwarzkopf and work with really cool stylists like @bescene Linh Phan, @maggiemh salon owner, @robtheoriginal artist and barber, Rickey Zito, Philip Wolff… the list just keeps going on!

LVB: This is super inspiring! I know you are at the top of the game and going to keep on climbing. Is there anything else you would like to say to fellow barbers/stylist who are reading this?

RC: Stop wasting time, start taking action and turn fear into a positive reinforcement instead of negative. Use it as fuel and go for it! Set goals, destroy them, set more and destroy those, too! If you are ever in doubt remember why you are doing these things. I write it down in my room on these big paper boards. It's a reminder ever morning of my ‘why’.

LVB: Can you still cut hair?